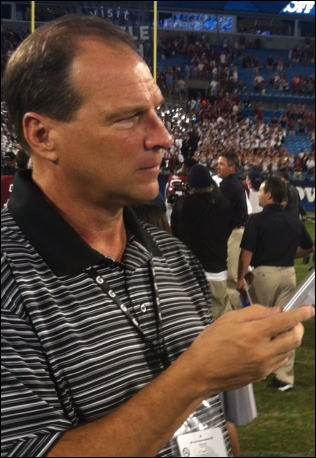 I’m Richard Walker and I’m a journalist who is passionate about sports and has spent most of my life writing and covering virtually all things sports-related.

With the diminished coverage that local sports is getting in newspapers, my plan is to give local sports fans a way to follow their local athletes and teams from middle school through high school to college and the pros.

I’ve written for newspapers in Shelby, Raleigh, Hickory, Durham, Charlotte and Gastonia. I freelance for the Associated Press and other national newspapers and publications in addition to being a regular radio guest co-host in Charlotte. Also, I’ve been a contributor for “Point After” and “Friday Night Football” on Charlotte’s WBTV Channel 3.

I started keeping stats at 7 and was first published at the age of 10. Ever since then, I’ve been covering sports. And I have been writing about the NBA Charlotte Hornets since their franchise began in 1988 and the NFL Carolina Panthers since they started in 1995.

I hope you like what you see. If there’s something missing, I’m sure it’ll be coming soon.