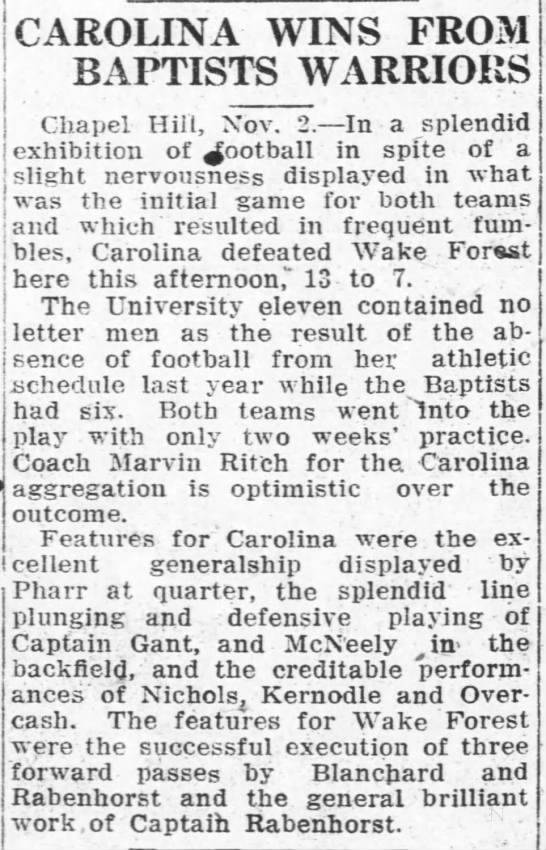 We’ve been here before: It’s just been 102 years since pandemic caused so many changes to sports schedules

The COVID 19 pandemic that’s ended or altered sports schedules has clearly changed our perception of sports.

But we have been here before.

It was all the way back in 1918 and the country was living through the end of World War II and an 18-month flu epidemic.

Back then, there was no social media, no television, no radio and limited newspaper coverage.

Yet while it’s been 102 years since the last medical catastrophe caused so many changes, there are striking similarities.

Like now, there was a debate about wearing masks that physicians said would curb the spread of both diseases.

And like now, high school sports fell by the wayside.

The 1918 flu epidemic marks the only time since the N.C. High School Athletic Association first held football championships in 1913 that a title-winner was not crowned.

The 2020 fall season won’t end in championships for any schools but the NCHSAA has planned scaled-back schedules for each of its sports to begin with basketball games in early January. That’ll include football championship games in April 2021.

College athletic schedules also have been altered with many games being postponed or even cancelled and every schedule starting later than originally planned.

In 1918 in North Carolina, the football schedule didn’t start until Nov. 2 and no team played more than five contests.

And even that team – the University of North Carolina – doesn’t officially recognize that 1918 season that ended with three wins and two losses in contests held from Nov. 2 to Nov. 28.

In the fall of 1918, Ritch suffered through heartbreak as his wife and one of his star players from Charlotte (and key UNC recruits) died from the flu.

His wife Hazeline Morris Robinson Ritch, 28 and a Gastonia native, died of what newspaper reports called “pneumonia-influenza complications” on Dec. 1, 1918.

Ritch would eventually become Belmont Abbey’s athletic director and athletic coach in the 1924-25 school year before later becoming an attorney in Charlotte for many years.. He would remarry and live in Charlotte until his death in 1971 at 82 years old. Often involved in politics, Ritch was instrumental in the establishment of UNC-Charlotte.

A week after Templeton’s death, Ritch began football practice drills at UNC for a reported “50 to 60 candidates” who were forming the Tar Heels’ first team since 1916; The 1917 season was cancelled due to World War I.

Reports of the day indicated that UNC had pending schedule agreements with longtime rivals Clemson, South Carolina and Virginia but none of those games were played.

Other schools played only a handful of games.

Davidson finished with a 2-1-1 record, N.C. State (then named North Carolina A&M) and Wake Forest went 1-3 and Guilford lost its only game. Duke (then named Trinity College for the Randolph County town for which it began) was in the midst of its 24-year ban on football – it would restart the program in 1919.

Locally, Gardner-Webb (then named Boiling Springs) and Belmont Abbey were both boarding schools colleges who would become junior colleges by the late 1920s and neither had started their football programs; Boiling Springs started football in 1920 and the Abbey got going in 1923.

N.C. high schools largely missed the entire football season as well.
Charlotte played two games against Charlotte’s old Horner Military Academy and reports indicate Goldsboro and Kinston had teams.
Gastonia and Shelby high schools had previously fielded teams but there are no reports to indicate they had a team in 1918.

Besides, newspaper reports on the area spoke of the spread of the flu in their respective cities.

A Sept. 27, 1918 story in The Cleveland Star (now Shelby Star) warned of the disease. A month later, the newspaper reported 3,138 cases and 25 deaths in Cleveland County from the flu.

Charlotte mayor Frank McNinch declared a quarantine in his city that lasted from Oct. 4 to Nov. 8 of 1918.

In Gastonia, city schools superintendent Joe S. Wray closed the schools from Oct. 16 to Nov. 4 of 1918.

Elsewhere in the state, high schools in Raleigh and Wilmington were converted into emergency hospitals.

However, even as a headline in the Gastonia Gazette of Dec. 18, 1918 stated “Cold Weather Brings Return of Influenza,” athletics did return to some form of normalcy once 1919 began.

The NCHSAA staged championships for basketball and baseball and in the fall resumed a football title game.

By the fall of 1919, the state again crowned a football state champion.
And a news release of Oct. 17, 1919 made no mention of the flu. It simply stated the finals will be held at UNC’s Emerson Field stated and that “last year on account of the war no championship was decided.”