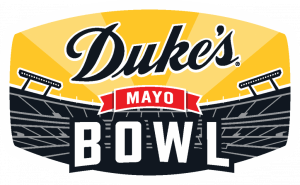 If you knew coming into Wednesday’s Duke’s Mayo Bowl at Charlotte’s Bank of America Stadium that Wake Forest would roll for 518 yards of total offense against Wisconsin’s top-ranked defense, you’d have to feel pretty good about the Deacons’ chances for victory.

So did the Deacons.

But football isn’t won by yards and multiple Wake Forest mistakes helped Wisconsin roll to a 42-28 victory that left the Deacons confounded and frustrated.

“Football is usually a game where the team with the fewest mistakes wins,” Wake Forest coach Dave Clawson said. “And they made a lot less mistakes than we made.”

Wisconsin forced four turnovers and racked up an amazing 267 to 25 advantage in return yardage to overcome being outgained 518 to 266 in total offense.

“And what happens is a good, hard-fought competitive game gets out of hand because of mistakes,” said Clawson, whose team led 14-0 and 21-14 before turnovers fueled 28 straight points by Wisconsin.

Charlottean Sam Hartman was unexpectedly the Deacons player who suffered the most.

A quarterback who had thrown one interception in his first 261 passes this year – a stretch that lasted into the second half – Hartman threw interceptions in four of his final 12 throws of the season before being replaced in the fourth quarter.

“You’re hoping with all the snaps he’s taken, he’d play his way out of it,” Clawson said of the former Davidson Day standout. “He wasn’t seeing things, feeling things, whatever.”

The loss ended Wake Forest’s season at 4-5 overall in a year in which four games were postponed, altered or cancelled and left the Deacons with a losing record for the first time since going 3-9 in 2015.

It also marked the third loss in which Wake Forest either had a late lead or seemed in early control. The Deacons led 42-38 at N.C. State in the fourth quarter before losing 45-42. They led 45-24 in the third quarter at North Carolina before losing 59-53. And they were up 14-0 in the second quarter on Wednesday before an avalanche of miscues  turned the game into a Wisconsin (4-3) runaway win.

The length of Wisconsin’s six touchdown drives say much about the troubles Wake Forest’s offense and its special teams – one punt was blocked and a 59-yard kickoff return allowed – endured on a chilly Wednesday afternoon.

Offensively, Wake Forest need possession for only 26:08 of the 60-minute game to roll up its 518 total yards against a unit that had previously allowed an average of 263.5 yards per game.

“We had a chip on our shoulder going up against the No. 1 defense in the nation,” Maginn said.

Instead, Hartman’s 20 of 37 effort for 318 yards and three touchdowns was more defined by the four interceptions. The mistakes also negated an extraordinary effort from receiver Jaquarii Roberson, who had eight catches for 131 yards and all three of Hartman’s TD throws. Christian Beal-Smith added 82 yards rushing and one touchdown to lead the Deacons’ 111-yard rushing attack.

Third team All-ACC kicker Nick Sciba, a 2018 Clover High graduate, did not suit up for Wake Forest, which didn’t disclose the reason for Sciba not playing.