Cherryville American Legion Post 100 will get a chance to increase its record for N.C. Area IV titles after finishing off a three-game sweep in the semifinals on Friday.

Cherryville (17-5) will host the winner of the ongoing Rutherford County-Queen City series in the Area IV championship series next week; Rutherford edged Queen City 9-8 on Friday to take a 2-1 lead in the best-of-five series.

Post 100’s win advances Cherryville into the area championship series for the 23rd time; Post 100 has won a record 18 titles and has finished runner-up four times.

The Area IV tournament began Monday. Here are the results and schedule:

The Charlotte 49ers on Friday announced a pair of key dates for the upcoming fall season. 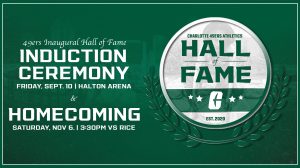 Charlotte will hold the induction ceremony for its inaugural Athletics Hall of Fame class on Friday, Sept. 10 at Halton Arena. Also, homecoming and the school’s annual all-sports reunion has been set for Saturday, Nov. 6 at 3:30 p.m. when the 49ers host Rice.

The Hall of Fame ceremony will be from 6-9 p.m. and ticket information will be announced soon. The inductees also will be recognized on Saturday, Sept. 11 during the Gardner-Webb at Charlotte football game.

Carolina Panthers fans can enjoy a night of football, fireworks and fun at the team’s annual Fan Fest presented by Daimler Trucks North America at Bank of America Stadium on Friday, Aug. 6.

Tickets to Fan Fest are $5 and go on sale beginning Tuesday, July 20 at 10 a.m. on Panthers.com and Ticketmaster.